ABOUT US /
OUR HISTORY 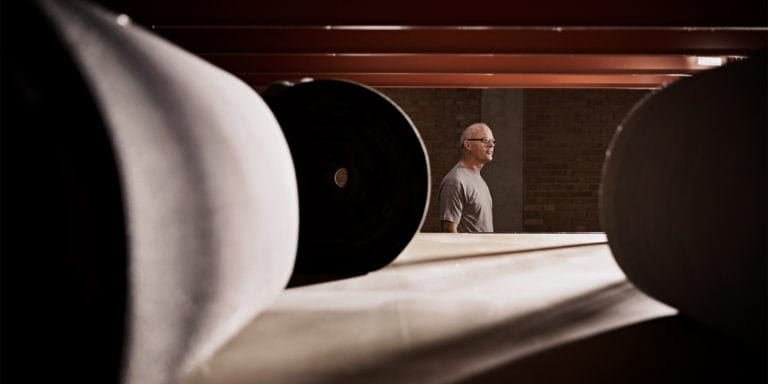 The History Behind
Dansk Wilton

1953 – Dansk Wilton was founded by Johannes Jensen as “Johannes Jensens Tæppefabrik” – at that time a small production company with only a few looms set up in the barn of an old farm.

The first productions were carpets in Wilton technique. The loom jacquards worked with punch cards and the Wilton technique was rather time consuming and had many limitations as to the number of colors and design possibilities.

Our market at that time was limited to the domestic market in Denmark and all carpets were sold through a network of wholesalers who resold the carpets to the Danish retail sector.

The 60s – birth of the “contract marked”

1966 – “Johannes Jensens Tæppefabrik” established a new factory and HQ in Birk, Herning – the heart of the Danish textile industry.

1967 – The company expanded rapidly and hired its first own salesperson. A few years later, in 1969, the sales group, now consisting of three salespersons, decided that there was no need to sell through wholesalers.

1972 – The company started its first export activities – with sales to nearby neighbouring countries Norway, Sweden and Germany. Seeing that the name “Johannes Jensens Tæppefabrik” was too difficult to pronounce on the export markets, the company name was changed to Dansk Wilton A/S.

Dansk Wilton also signed its first big order for the contract market in 1972 – 22.000 m2 of Wilton carpet was sold to the brand new Hotel SAS Scandinavia in Copenhagen. At that time, this order was the largest single carpet order in the history of Danish carpet industry.

1975 – Dansk Wilton had orders for 22 ships under 5 different flags: Danish, Swedish, Norwegian, Greek and Australian. Just a year later Dansk Wilton secured an order for 7 modern ferries for the Polish government and export sales expanded rapidly to countries such as Russia, Kuwait and Iraq. In just a short time the company’s turnover was increased by more than 50%.

The 80s – historic order from Harrods in London

The export activities in Dansk Wilton continued to grow dramatically in the early 80s.

1987 – A historic order for almost 130.000 m2 of Wilton carpets (32 acres) was landed for the famous department store Harrods in London. This was in every way a huge order at that time.

1988 – Dansk Wilton purchased and installed its first Axminster looms. Still the looms worked with relatively simple punch cards and although designs could be made with up to 8 colours, the size and complexity of designs were still limited by the punch cards.

Dansk Wilton’s activities within the cruise ship industry continued to grow and by the late 80s, the company was one of the leading carpet suppliers to the global cruise industry.

1993 – Paul Gadegaard, the Danish painter and sculptor, designed the iconic sculpture that soon became the logo trademark of Dansk Wilton.

Already back in 1959 Johannes Jensen went to USA to look for faster tufting looms. At that time, he said: “When the tufting looms can do unlimited design patterns, I will invest in the technology”. The American manufacturers replied, that it would take another 5 years… In fact, it took 35 years before the tufting looms could do designs and patterns without limitations.

Again, Dansk Wilton proved to be one of the pioneers in the Colortec production.

1995 – The first Colortec high speed tufting loom was installed and a new era began. Colortec production is faster and cheaper compared to Axminster, but the carpet qualities are identical.

1994 – From now on all Axminster looms at Dansk Wilton work with electronic jacquard machines, and design possibilities are nearly unlimited.

The iconic sculpture from 1993 and the first Colortec tufting loom from 1995.

The 21st Century – growth continues in a family foundation

Dansk Wilton continued to experience a high growth in the export activities and today we have an export share of almost 99%.

2000 – Dansk Wilton began to use a new logo line with the Gadegaard sculpture as the main logo feature, and in 2013 Dansk Wilton celebrated its 60 years anniversary.

2007 – Johannes Jensen died at the age of 82 years. The ownership of Dansk Wilton was transferred to a family foundation that today owns 89% of the shares in Dansk Wilton. The remaining 11% is owned by Anne Marie Mau, daughter to Johannes Jensen.

Today, the heart of our business is still innovation, craftsmanship and first class service. We  secure a close cooperation between designers, architects and owners, and deliver a unique carpet design with the highest respect for quality. At Dansk Wilton we constantly strive to give our customers unique and complete solutions in order to secure our continued growth in many years to come.

The Birk area in 2005 and 2010. The area is in constant development with great emphasis on art, architecture, design, and education.